I recently recieved two returns on some custom cards I made not too long ago. Simple designs, but they look great when signed. 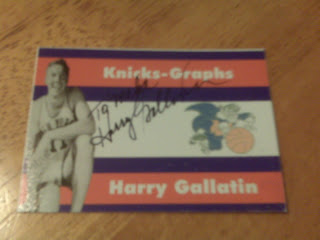 Harry Gallatin signed this card in under a week's time. He played for the New York Knicks from 1948-1957 befor playing a season and a half with the Detroit Pistons. At 6'6", he was an undersized center, but still made 7 All Star Teams, pulled down a Knicks record 33 rebounds in a game and made the Basketball Hall of Fame in 1991. Not a bad career for an undersized center. very pleased to be able to add "The Horse" to my Knicks autographed collection and he also gave me permission to send a mini basketball for him to sign. 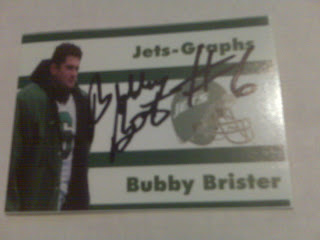 Bubby Brister is probably more know for his career with the Pittsburgh Steelers where he played from 1986 to 1992. But he did spend a year with the Jets in 1995. It was not a good year for the Jets. They finished the year at 3-13 in Ritchie Kotite's first season as Jets head coach. Who knew the worst was yet to come. Brister backed up Boomer Esiason that year. He played in 9 games, was 93-170 for 726 yards, 4 Touchdowns and 8 Interceptions. Not great stats. After the '95 season, he moved on to Denver and won 2 Super Bowl rings as the back up to John Elway. Bubby signed this card in about a months time for my Jets autograph collection.
Posted by Yankeejetsfan at 11:20 AM