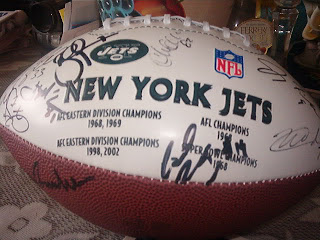 One of my pride and joys of my New York Jets collection is this team signed ball, although I would hesitate to call it team signed as it's not the complete team. There is no Chad Pennington or Curtis Martin (There is a reason why there is no Martin on here, which I will explain tomorrow). No Wayne Chrebet or Lavernus Coles. No Herm Edwards or Shaun Ellis. Dispite the lack of bigger stars, there are 27 signatures on this ball and I'm very pleased to have it.
I went to Jets training camp in the summer of 2005, when the team was in Hofstra on Long Island. It was my first Jets training camp and I have not been to another since they moved their camps upstate to Cortland. It was the first 2 days of camp, so you can imagine who crowded it was. I was able to pick up this ball at the tent Modells put up and it came with a marker. Not knowing any better, I used the pen instead of a sharpie. At times the pen faded while the player was signing it.. 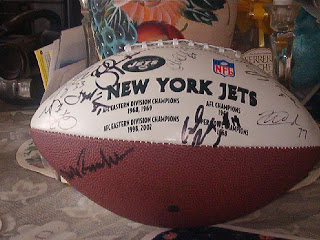 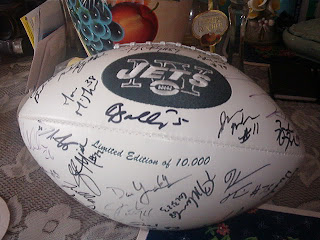 Off the top of my head, I can remember getting signatures of players such as Jay Fiedler, Kevin Mawae, Mike Nugent, Kerry Rhodes, Justin McCareins, Chris Baker, Jehrico Cotchery, Brooks Bollinger, Bryan Thomas, Victor Hobson, Terry Bradway and Mike Tannenbaum on the ball. There are others, but I just don't remember who else signed it. I tried to keep a cheat sheet of who signed, but in the rush of getting signatures, I forgot to keep tabs at times.

I had a lot of fun going to training camp and would love to go back again. The Jets have a beautiful training facility in Florham Park, NJ. I'm not sure why they just don't have camp there. I'm sure Rexy has his reasons. Maybe it's too close to the nightlife of NYC and he doesn't want his players distracted? Anyway, until I can get a car, I will not be making the trip to Cortland for training camp.

Also, with these white pannel balls, I have heard that the signatures will eventually yellow or fade. I hope not. I have had the ball for 5 years and so far, the ball looks as good as it did the day I got the autographs. But next time, I'll just get an official ball and a paint pen. Or maybe a regulation sized helmet.

Posted by Yankeejetsfan at 2:11 PM