An Open Letter To The New York Jets 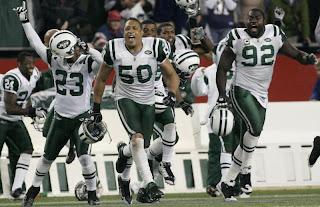 With your AFC Championship game just hours away, I felt compelled to write. I just wanted to find some way to convey how excited I am and what this game to myself, the fans of this team and most importantly, this franchise. A franchise that was once a laughingstock, is now one game from the Super Bowl.

I have been a Jets fan since 1980. My earliest memories of the Jets is watching Richard Todd toss touchdown passes to Wesley Walker and Joe Klecko terrorize the opposition at the old She Stadium. Freeman McNeal shredding defenses and the Sack Exchange bringing down the QB. As fond as those childhood memories are, I also can say in the 30 years I have been a fan, I have seen anything that can happen, happen. From AJ Duhe and the 1983 AFC Championship game against Miami, dubbed the Mud Bowl because Miami didn't cover the field during days of pouring rain, to the 1986 AFC Divisional playoff game against Cleveland where a late hit on Bernie Kosar by Mark Gastineau on a 3rd and long allowed the Browns to drive down, tie the game in regulation and then win the game in overtime. To Dan Marino's fake spike to John Elway and Denver beating the Jets in the 1999 AFC Championship Game. To Bill Belicheck resigning after 2 days as Jets head coach to last year's loss to the Colts in the AFC Championship game. What I have not seen in my lifetime is the Jets in the Super Bowl. Let's face it, New York City still belongs to the New York Football Giants. Especially after they pulled off a shocking win over the Patriots in Super Bowl XLII. Yet, this city is in a frenzy over the Jets for the first time since probably 1969 when Broadway Joe won Super Bowl III. You guys can own this city if you win two more games. Everyone is wearing Jets cap, stores are hanging Let's Go Jets signs in their windows and Mark Sanchez has surpassed Derek Jeter as NY's resident dream boat. It's a great time to be a Jet fan. Plus, no one likes you guys. They say you talk too much. Who cares?? I'm glad to see some swagger in this franchise. For too long all I have seen are Jets players with their heads hanging down after a heartbreaking loss. Since Rex Ryan has taken over, there has been no taking a backseat to anyone, no more "Same Old Jets". This team has been to the AFC Championship game for the past two seasons, no Jets team can say that. Now is time to take that next step. This team can do it. This team is good enough to be in Dallas, playing for the Lombardi Trophy.

So, as I rest my weary head tonight, I will say my prayers and include a special prayer for the Jets. No one expected you to be in Pittsburgh and no one expects you to be representing the AFC in the Super Bowl. You have been proving the critics wrong so far. A win tomorrow would be a swift kick in the rear to all those nay sayers. Tomorrow night, I want my facebook status to read "Let's have a F'ing Snack, The Jets are going to the Super Bowl". Make it happen.

Long Time Jets Fan
Posted by Yankeejetsfan at 12:02 AM