A great game by the Jets.. well, almost. Yeah, they eeked out the win by 2 points over The Colts, but Mark Sanchez drove me absolutely nuts in this game. Over throwing, under throwing recievers, yet when it counted he made the most of his throws. None was more improtant than the throw to Braylon Edwards with under a minute left in the game to give Nick Folk better field position to kick the game winning field goal.
Loved the ground and pound game by LT and Shonne Greene and the defense made the stops when they needed to. Now the Jets play Tom Brady and the New England Patriots next Sat @ 4:30. Not going to be an easy game, especially on the road. If the Jets win this game, then I will be convinced they are Super Bowl bound.
To celebrate tonight's victory, I will show off my three favorite signed IP mini helmets: 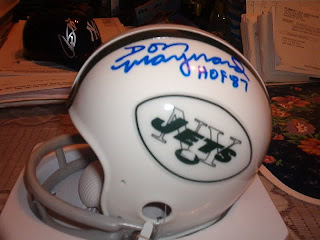 Don Maynard-I got this throw back signed by Maynard a few years back at the Long Island Sports Card Show at Hofstra University. Nice guy,but didn't really say much. Still, it was an honor to meet the greatest wide out in Jets history. 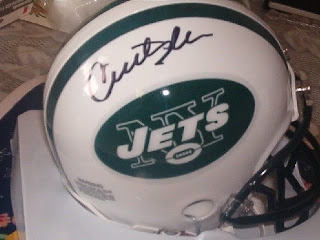 Curtis Martin-Remember when I said I didn't get Martin to sign my Jets football when Iwent to training camp? This is why. I managed to get him on this mini helmet. After practice, he ran in from the field and started signing by the stands. I was the last one he signed for. The only bad thing was there was this guy behind me that kept pushing me to get to Martin. There was two small kids in front of me and because of this guy, I kept practically falling on them. I told him to quit it cause of the kids. He actually told me he didnt care about the kids. C-Mart came over and the started to sign for the kids. He actually tried to cut in front of them. I couldnt take the guy's rudeness anymore and put myself in his way so he couldnt get to cut in front of the kids. Martin saw that and said thanks, signed my mini helmet and ran off. The guy behind me was livid and actually followed me out, threatening to kick my butt. Just when I thought I would have to fight this guy,the kids dad showed up. This dude was about 6'6'' and stacked. He was watching froma few rows back and scared the dickens out of this guy without saying a word. The guy ran off and the kids dad wanted to thank me for looking out for his kids. To me, kids come first in this hobby. They are our future and really, I love seeing the smile on a kids face when they meet their favorite athletes for a few seconds. I always try to let a kid go in front of me at a sporting event and if I don't get the auto, then it wasn't meant to be. 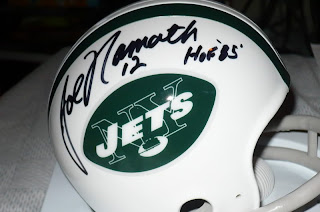 Joe Namath-A couple of years back, Namath did a free signing at a Sprint Store in Manhattan. Very rare to see Namath at all anymore much less a free signing. I made sure I took the day off for that one. Funny thing was, practically no one showed up. They were letting people come back for 2nds. I wish I bought a football or jersey to have him sign. Oh well, I'm just glad I got to meet Mr. Jet. I did ask him inscribe Super Bowl III MVP,but he said he couldn't as his older brother would beat the s*&# out of him as he isn't the MVP of his house. Okkkkkkk. I guess that was code for "Steiner Sports has me under contract and I can't inscribe that". Oh well, I'mjust thrilled to have his autograph in my mini helmet collection without having to shell out $400.00 at a convention.

I do like getting mini helmets signed. I think they are a great way to build a football autograph collection. Plus, they don't take up as much room as footballs do. Hopefully, when I do get a man cave, I'll have built the collection and will be able to display them prominatly.

Posted by Yankeejetsfan at 12:13 AM