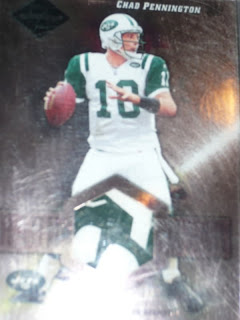 Chad Pennington was the Jets QB from 2000-2007 before he was let go in favor of Brett Farve. He was a first round draft pick, 18th overall, taken out of Marshall University by then Jets GM Bill Parcells. He took over the position from Vinny Testeverde after the fifth game of the 2002 season, when the Jets were 1-4 and led them to a 9-7 record and the AFC Eastern Division title. Dispite injuries that plagued him throughout his career, he managed to lead the Jets to the playoffs 3 times, including a 41-0 thumping of the Indianapolis Colts in the 2002 Divisional Round. His lack of arm strength was always an issue, but when he was healthy, he found ways to beat you. An incredibly smart football player, he was a finalist for a Rhodes Scholarship, he is the NFL's all time leader in completion percentage with 66.1%. I truly believe, had he stayed healthy, he could have lead the Jets to the Super Bowl. He's going to be a hell of a coach one day, if he goes that route.
I used to collect Pennington. I have autographed cards, game used cards, base, inserts and rookie cards. Out of all the cards I own of his, I think this one is my favorite. It's a game used helmet card from Leaf Limited. I believe it's from 2005. What I love about this card is that the T and the S from the Jets emblem on the helmet is so prominent. I saw it at the Westchester County Sports Card Show in White Plains, NY one year. I asked the dealer how much it was, with trepidation as I figured he would say it was a 50.00 card. To my surprise, he said it was 10.00. I couldn't get my wallet opened fast enough and it now sits proudly in my Jets collection.
I have been thinking about re-starting the Pennington collection. I really don't collect any Jets players right now. None of the players we have now are ones I follow with interest. The main reason I stopped collecting Pennington was because he went to Miami. Miami is a team I pretty much despise and I just couldn't see myself collecting any cards of Pennington in a Dolphins uni. If I do resume, it will only be of his Jets years. That's how I choose to remember him.
J-E-T-S, JETS, JETS, JETS!
Posted by Yankeejetsfan at 9:28 AM