As of late, I realize I have been blogging more about my love for all things pop culture, then my love for sports. But make no mistake, I am still a collector of all things Yankees, Jets, Devils and Knicks. I have been picking up cards here and there as well as autographs that I will show off in upcoming blogs. With baseball season soon to be here, I am very excited about the possibilty of a Yankee World Series.

But today, this is not about the Yankees. This is about bobbleheads. More specific, new adds to my bobblehead collection.

I haven't added any new pieces in quite a long time. That changed recently with a gift and 2 ebay purchases, both of which were absolute steals. I mean, highway robbery. I paid a lot less than what I have seen these bobbles go for on ebay and I am quite happy to own them.

First, we get to the gift. 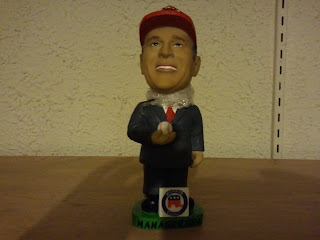 A buddy of mine in my baseball card team collectors group sent this to me. Me being the non-politcal guy I am, had no idea where this particular bobble came from. I knew it was George W. Bush, but wasnt sure which team gave this out and when. A quick google search told me it was a SGA from the Rochester Red Wings back on 7/22/2002. It's a nice bobble, but again, I am not a politcal guy, so I am not sure if it will be up for trade at some point or, being that it is a gift, I will hold on to it. 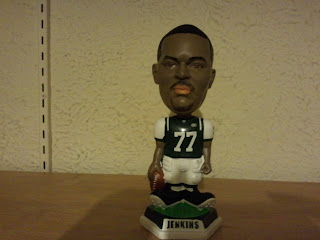 Next, we come to the first bobble I bought off of ebay for a whopping 5 bucks dlvd. 99 cents for the bobble, 4.99 shipping. It's a Kerry Jenkins New York Jets SGA Knucklehead Bobble. I'm not sure of the date on the actual give away. I ran a search on it and came up with nothing. All I know is the Jets give the fans in attendance a voucher to pick up the bobbles at participating P.C. Richards in New York and New Jersey and the race is on. I'm not sure if the bobbles were limited, but I have heard of fans getting shut out on these. 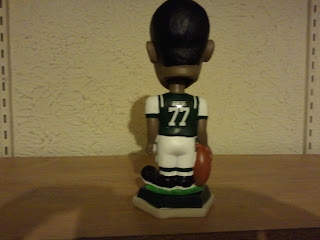 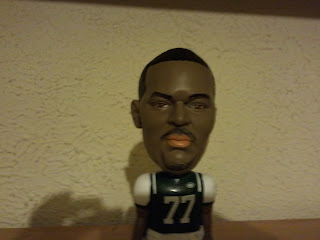 I've never really been a fan of Knucklehead bobbles. The likeness on these to the players are not the best and I really hate how they make the players look like they are wearing clown shoes. I have seen Yankee Knucklehead bobbles and have held off from picking any up, even though there are a few players I would like to have in my bobblehead collection. Ever see the Randy Johnson one? Scary. So far, I have just these 2. The Sanchez was the first one I picked up. I will be going for the set eventually, since these are really the only Jets bobbles I see aside from the Forever bobbles and the few Alexander Global bobbles I see. This set will eventually be mine.

I will post once the 2nd bobble arrives. I'm expecting it within a few days.
Posted by Yankeejetsfan at 11:08 AM