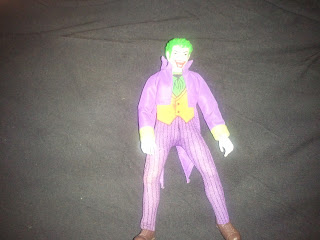 For today's Mego Monday, I am showcasing one of my favorite Mego figures in my collection, The Joker.

This is a figure I never had growing up, but had to have once I started collecting loose Mogo figures. I mean, Batman has to have an arch nemisis to battle. yes, I know that Mego also produced Penguin, Riddler and Catwoman figures, but to me, The Joker is the quintessental Batman villian. He is a must for any Batman/Mego collector.

What I love about this figure right off the bat is the sculpture of the head. It screams classic Joker. The smile, the hair, right down to Jokers pointy chin. The clothes that Mego outfitted the Joker in is just perfect. The colors of purple, yellow and green just jump out at you. even the brown shoes they put on him is a nice touch. This is one of those figures that Mego did right, down to the last detail. Luckily, the Joker I was able to buy has all original clothing and shoes.

Mego also released a Fist Fighting Joker as well as a Joker Mobile, which was a van with all the tricks you would expect the Joker to have like a huge fist and a squirt gun. A Joker mini Comic Action Hero and bank were also produced. These fetch a nice chunk of change on ebay. I do hope to add at least the Joker Mobile at some point to my WGSH Mego collection.

Joker is just one of those Megos that is just about the perfect figure. Mego was able to produce a lot of figures that you could call the perfect figure. Spider-Man, Superman, Green Arrow, Penguin, Green Goblin and Lizard all come to mind when I think about that discription along with the Joker. The Joker is one of those figures that looks great on any shelf. If your a collector of Batman or Mego or vintage toys, this is a must own for your collection. I'm glad I have one.
Posted by Yankeejetsfan at 11:18 AM