This week’s assignment from the League: Zombie Apocalypse

So, this weeks question posted by Brian over at coolandcollected.com was basically, if you were attacked by zombies, which T.V or movie character would you want to help you beat up the zombies. I had some ideas of who I would want in my corner. Ultimately, it came down to 2 guys. 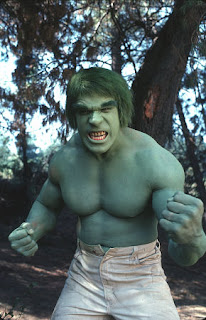 First, I thought of the The Incredible Hulk. I mean, this guy is such a juggernaut. He can pretty much wipe out anything and anyone. But, then I realized he's pretty much a loner and can be really hard to control once he is all green. After defeating the zombies, he's liable to slap me around a bit. Or, even worse, what if the zombies get to Banner before he hulks up? Then I'd have to deal with a zombified Hulk. I read Marvel Zombies, no thank you! 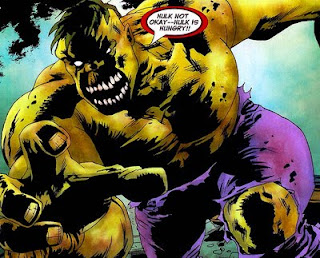 Then I realized there is really only guy for the job. Someone who thinks like a zombie, but is still human. Someone who embraces the dark side. I mean, one of his nicknames is The Dead Man
BOING!!!! 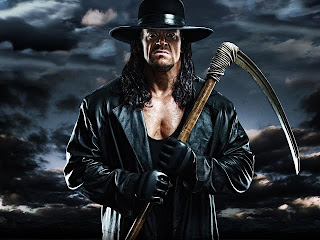 That's right kiddies, I'm talking the Phenom, The Undertaker. I mean, the guy is huge, can fight and just doesn't give a damn who he hurts and how bad that person gets hurt. You can't hurt the Undertaker. He's practically dead anyway. Bobby Hennan, the greatest announcer and color commentator in wrestling history, once said The Undertaker has formaldehyde running through his veins. That's pretty bad ass.
I can see it now. We are surronded by zombies. we fight. I'm blasting them in the head. I look over and 'Taker is just slugging them and ripping their heads off. He finishes them one of 2 ways. 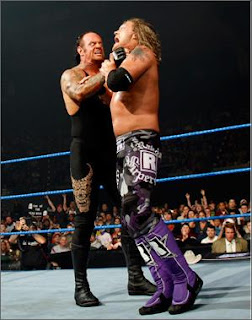 One, he will just grab that sucker by the throat and Chokeslam it back to hell, ripping its head off in the process 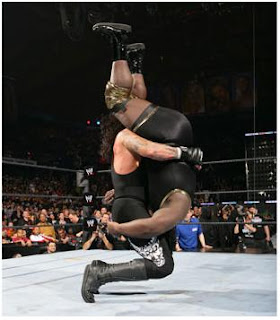 Or two, Tombstone! Heads roll from the impact of such a blow. Zombie or no zombie, I don't know many who would enjoy being dropped on their head, knocking them senseless. 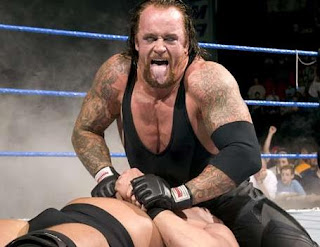 Either way, The results are the same. Victory is academic. 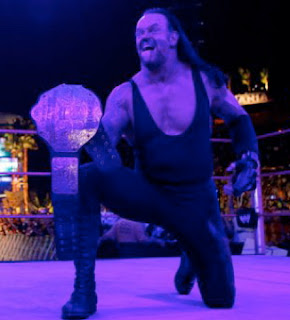