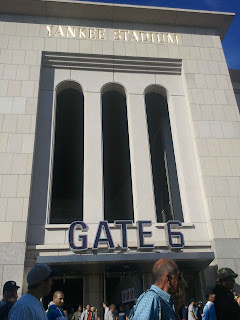 Last Wednesday I was able to attend the Yankees/Blue Jays game at Yankee Stadium. It was Snoopy Bobblehead Night and I wanted to make sure I got one for my Yankees bobblehead collection, so I took the day off from work. I was the first one through the gates and I was thrilled when I was handed my Snoopy bobblehead. Yes! I had to take the day off from work, but I got the bobblehead. 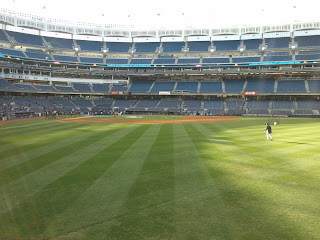 I got to the right field seats and saw Derek Jeter taking hacks along with Alex Rodriguez. During Arod's turn, he launched a ball toward my section. I ran to the spot where I was sure the ball would land and sure enough, I felt the painful slap of rawhide meeting the skin of my hand, causing it to turn red. I did it, I caught ball #3 and from Arod no less. What a moment. What a.... the next thhing I knew, this older gentleman came over and slapped the ball out of my hand. I helplessly watched bounce 3 feet away and into the hands of another adult.

Ok, I realize it was just batting practice, but I will admit I lost it. I yelled I had that. The guy, smugly told me he didn't see my name on the ball. I held up my palm to show the redness so he could see it was in my hand when he smacked it out. He said I didn't close my fingers so it was fair game. I could see I wasn't going to win this arguement, so I walked away. Had that been a home run ball in an actual game, I might not have been so quiet.

It was close to game time and my buddy sent me a text message that he arrived. I wanted to see the look on his face when he saw how cool this bobblehead was and maybe he would think he should have taken a day off as well...until I saw him carrying the box as well. Oh well. Maybe I should have gone to work as well. 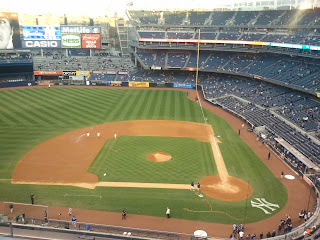 The game was a good one. Both the Yankees and Blue Jays scored a run each in their halves of the 2nd inning. That score held until Ichiro singled in Curtis Granderson with the go ahead run in the botom of the 8th. A half inning later, Raphael Soriano closed out the game and we all untucked our shirts for a 2-1 Yankee win.

Now, a look at the goodies 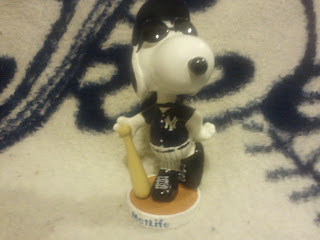 Snoopy looks great in Yankee blue, with pinstripe pants and Yankees cap. I realize it's the same bobblehead that was given out by the San Francisco Giants a year or 2 ago. As a huge Peanuts fan, I am hoping we get Charlie Brown and Lucy as well in the upcoming seasons. 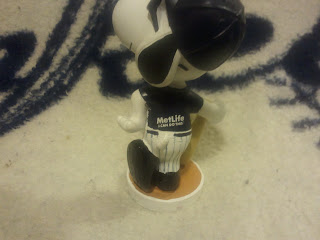 I think the only difference from the Giants give away, aside from the uniforms, was that Snoopy had a number, which I think was 07 on the back of his unifrom, while the Yankee one just has the MetLife logo. The 07 on the back of Snoopy's uniform was to signify the year the bobblehead was given out. 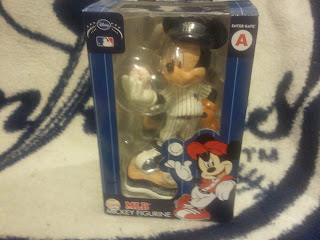 I also went to the Yankees Clubhouse store and picked up a Mickey Mouse figurine I have been eyeing for the last season or two. Yes, I am a fan of Disney and wanted this figurine to go with the Mickey Mouse All Star figurine I already owned. 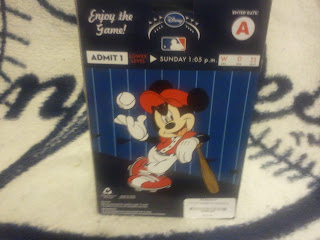 Back of the box. 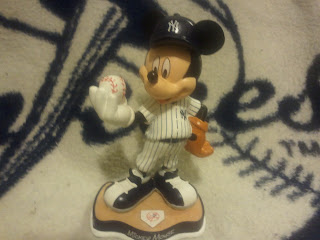 Here's Mickey decked out in the home pinstripes. Like the base he comes in with a small home plate with the Yankees logo on it. 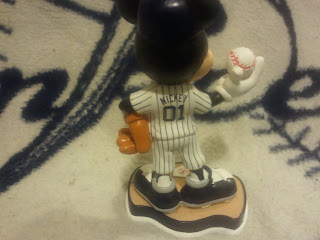 Back of the statue has Mickey sporting 01 and his name on the top. Doesn't Mickey know there are no names on the back of the Yankee uni's? Shame on whoever issued that jersey to you. Now, I need to hunt down the Disney bobbleheads, which would make my Disney Yankee collection complete.

Would have been great to have bought home that Arod ball, but I think I did pretty well regardless. These new additions are going to look great in the Yankee bobblehead/figurine collection. No, they aren't players, but I love adding these to my collection as it diversifies the Yankee shelves and as a collector, I want my collection to differ from another Yankee collector's collection. I think one's collection is an extension of the personality of the collector and my love for cartoons is pretty well represented with Snoopy, Mickey and Woody before them. Now, if only they made Marvel or DC Yankee figurines/Bobbleheads....
Posted by Yankeejetsfan at 11:05 PM