Honestly, I have never been a huge fan of spending crazy money on a single toy/statue/whatever. I would much rather take $300.00 and buy more than one thing. Then again, I'm the type of guy who can go into a convention with $300.00 and not spend any of it. I know, with all the things I have bought recently, it is hard to believe, but there are times when I see something I have wanted for a long, long time, I walk away from it and leave it behind as well as a stunned look on my buddy, George's face. George, understands that I'm not made of money, but sometimes he will have to talk me into treating myself once in a while.

Take the Hot Toys figures. I really dig them. Love how realistic they look and I have been dying to own the 1989 Michael Keaton Batman, The Jack Nicholson Joker, The Christan Bale Batman, Heath Ledger Joker, Iron Man, Spider man, Christopher Reeve Superman to name a few. I know once Hot Toys releases the 1966 Batmobile and, probably, a Adam West Batman, I will be beside myself in wanting to own one.

But seriously, I'm not a guy who can be confused with having deep pockets. I can't just drop $250.00 on a action figure. I have to save for it and, once I do save up, the moment has usually passed me by and I'll go off and do something else with that money.

But, if I was going to buy an expensive figure...

I would make this my first extravagant purchase: 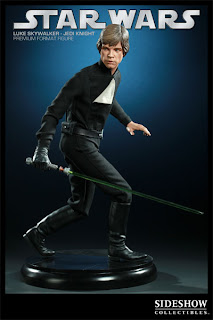 I was looking on Cool Toy Review and saw a link for this awesome Luke Skywalker figure and clicked on it and squealed with delight. This thing is pretty detailed and looks a lot like Mark Hamill. Don't believe me? 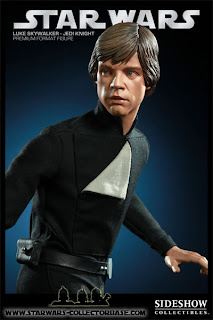 Looks pretty good to me. 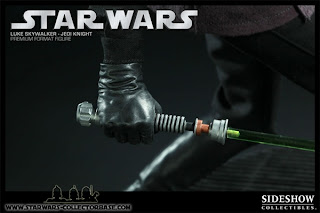 Love how detailed this is. Right down to his glove, lightsaber and hand 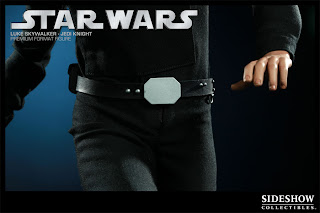 What's real cool is the lightsaber lights up. I would love to see what one of these looks like in person before I would even think about jumping the gun and buying it.

I like the stuff Sideshow releases. I have seen their other Star Wars figures and have been tempted to pick up a few Luke Skywalker statues I've seen like the Farm Boy Luke, and Bespin outfit Luke. Man, if this thing was 89.99 and I had a place for it, I would definitely snatch it up. I'm sure a lot of you more experienced collectors know how to get something like this cheaper than retail, which is $289.99. There is a payment plan option of 3 payments of $96.66, which take the sting out of paying the whole thing at once. Still is a nice chunk of change regardless.

As cool as this figure is, I would probably have to pass on it unless it takes a nose dive to a more "Mikey" economic price. If I would pass on a Batman Mego, mint in minty box, then you can bet I would let this one go.

Still, the figure is pretty bad ass and would love to see one of these in person, which might be a bad thing because I might try to smuggle it faster than Han Solo smuggles cargo in the Millennium Falcon.