I love addng to my collections. Let me rephrase that. I LOVE ADDING TO MY COLLECTIONS. Sometimes, I come across something totally by accident and some times I look for a particular item to add to my collection. This weekend, I was able to do both.

I hit up a flea market in Hells Kitchen in Manhattan and really didn't find anything to add to the House of Swag. Later, I hit up Target to pick up a couple of storage cases for my figures and I came across a couple of new additions that I have been looking for: 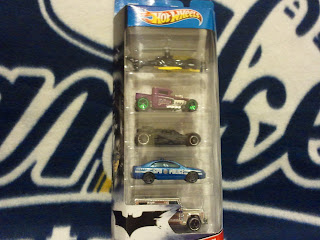 I had seen these Hot Wheels Dark Knight Batman 5 pack car set before yet always passed up on picking them up. But, for 4.99, I wasn't going to pass up on them again. This set includes a Batcopter, Bone Shaker Special Joker Edition, A Tumbler for my Batmobile fleet, A Ford Fusion Gotham PD Patrol Car and an Amored Truck. Nice addition. 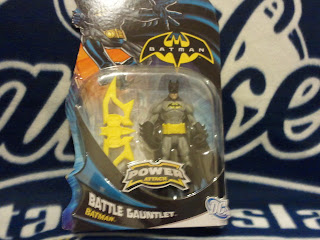 I've been keeping an eye on these new Mattel Batman figures for a while now. I thought the new Bat logo on his chest was unique, yet again, I hesitated on purchasing one for the Batman collection. I finally decided to grab it when I saw it was the last one. I have never been one to pick up the "specialty" figures like the Blizzard suit Batman or the Underwater Adventure Batman. I stick with the regular figures. I like this one, but the one I really want is the Blue and Grey Batman figure, so I will be keeping an eye out for that one.

As a kid in the late 70's I loved Halloween. I used go with my mom to Woolworth's on Fordham Rd and pick out my costume for that year. I have been Spider-Man (Natch!), Batman (Duh!), Darth Vader, Gene Simmons and a Zombie. The one thing I always had was my trusty Spider-Man Halloween pail. I loved that thing. It was huge and it was shaped like Spidey, just like the bank that came out around the same time, which I also had. Over time, I lost both and have been looking to readd them to my Spider-Man collection. Look what this sexy geek won on ebay last week: 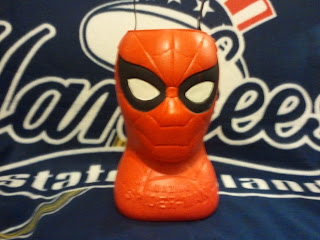 That's right. I was able to get the Halloween pail at a great price. Look at this thing, It's fantastic. 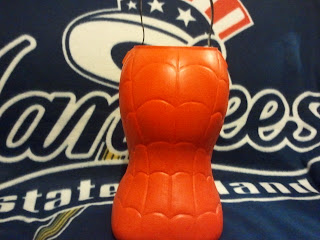 You got no candy? Spidey gives you his back! Make with the sweets, True Believer! 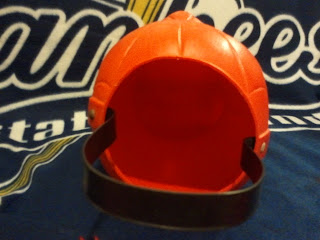 Aside from the fact that the pail looked like the Web Head, look how deep this pail goes. It would take me a whole day of Trick or Treating to fill this monstrosity. Just the way I liked it. I always got more than my sister, but my mom always made me share anyway. So, I gave her the Mary Janes and Jaw Breakers while I kept the Snickers, Goobers and Hershesy. Not only was I a sexy geek, but a greedy one at that. Mwhahahahahaha! Then Mother Nature got her revenge later that night. Stomach aches, bitch! You would think I'd learn that she was on my sister's side, but no. I tried the same thing the next year with the same result. Then again, you would think my sister would have gotten a bigger bag.

I was real happy to find that pail. A classic piece of my childhood is back in the collection. They don't make pails like this anymore.  Now, I just need to get a hold of the Bank and I'll be a happy geek. And If I could pose as a kid and fill this sucker at Halloween, it would be the icing on the cake.
Posted by Yankeejetsfan at 10:50 PM