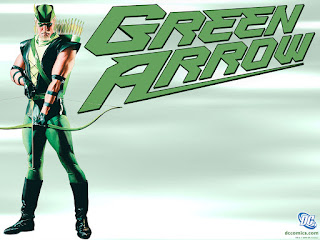 Today's Mego Monday post is one of my favorite Mego figures I own, The Green Arrow. Now, admittedly, he was not one of my favorite characters growing up, but as I read stories like Identity Crisis and Blackest Night, I have gained a new respect for Ollie Queen. Enough to want me to hunt down Kevin Smith's Quiver graphic novel real soon. 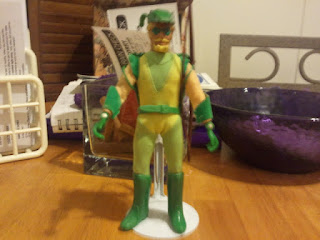 This is one of Mego's better figures. The costume, colors and accessories help bring Green Arrow to life for the youth of the 1970's. It's figures like this that have me convinced that the toys we had growing up back then are way better than the stuff that comes out today. But, to me, the reason why this is one of Mego's masterpieces is this: 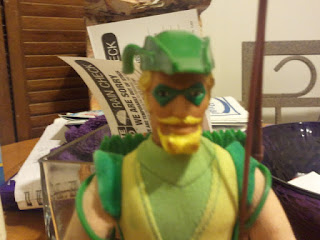 Check out that well sculpted kisser. Looks almost exactly like Oliver did in the Neil Adams drawn comics back in the 70's. 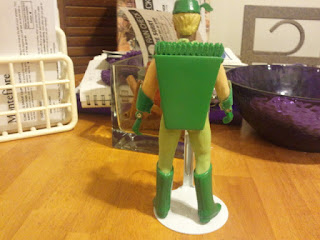 The back of the figure showing off the plastic molded sack in which he carries his many arrows. I'm sure he had a couple for the producers of the Super Friends. I'm sure Ollie was a bit peeved he was not in the show. I bet he was thinking, "You have a character named Apache Chef, but not me?? Are you kidding me?" 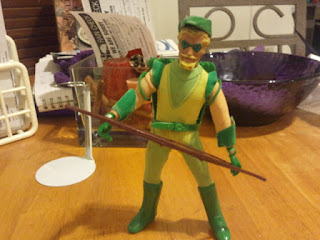 As with most Mego figures, posing these figures is just not going to happen. With this particular figure, he has the handles of the sack hindering his movements, plus this is the first wave of figures. You can tell by the wrists as they have the circular metal joint rather than the plastic joints the later figures would have. This is almost a 40 year old figure, so posing it in all these crazy positions could do some damage to Mr. Queen.

This figure was also my first purchase off ebay that taught me a lesson of trusting dealers. I paid a pretty penny for Green Arrow, $70.00 back in 2006. The listing said everything was original. But, when I got the figure, I looked him over and noticed that the bow and boots had a DM on them.That means they are Doctor Mego reproductions. The hat and costume are real. Not sure about the back pack. Now, I don't mind if they are repos. It's for my displaying purposes only. Just don't lie and say everything is original. I did nothing because I really wanted the figure. I'm glad I kept it. The price of this figure has gone up.

As a kid, Batman, Spider-Man, Superman and Joker were my favorite Mego figures. They still are to this day, but I have come to love this figure just as much. I'm kind of glad I didn't have this figure as a kid. I probably would have broken all the accessories and not have appreciated Ollie like I do now. As both a figure and character.
Posted by Yankeejetsfan at 10:12 PM