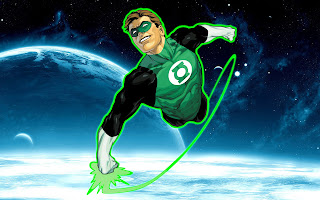 I am a huge DC Comics fan. Batman is my favorite in the DCU, but I also have love for Superman, Wonder Woman, and Aquaman. I truly believe that DC is coming out with some great comics, with Batman and Justice League leading the way. One hero that I have always been intrigued with, but never really got into is the Green Lantern.

Oh, I like the character. I love the green, black and white suit, and the powerful ring.I grew up watching the Green Lantern on Super Friends. I have read Green Lantern: Rebirth and Blackest Night. Thought both were OK, nothing terrific. I saw the movie and liked it enough, even bought 2 of the mini figures. But to be honest with you guys, I don't really know too much about the character, aside from the basics. I thought a lot of the history of the character and some of the stories were kind of confusing. But, I wanted know more about Lantern. I know he has become extremely popular in recent years, so I wanted to see what everyone liked about Hal Jordan. To this is I decided to start from the very beginning. 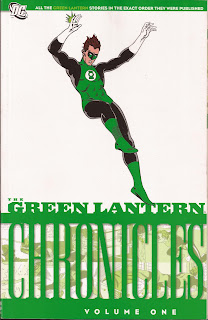 I found this graphic novel at a half price store I wandered into. The book was 4 bucks, so it came home with me and I started reading it on the train ride home. By the time I got home, I polished off 30 pages of the book and thoroughly enjoyed the early stories I read. 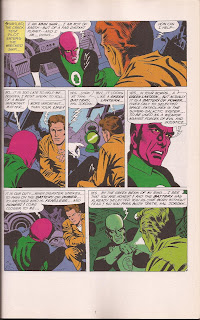 I got to read the first story where a dying Abin Sur gave Hal Jordan The ring and lantern. I really loved the art of these early stories, which was done by the legendary Gil Kane. I was a fan of his work on Amazing Spider-Man, so I knew these stories would be well drawn. I thought the stories, which was written by John Broome, was pretty good. I did think he should have gone into a bit more detail as to how Jordan mastered the powers of the ring because in the next story he was flying around like he was always a Green Lantern. Obviously, later on, this was explained, but I felt Broome should have tackled the subject from the beginning. 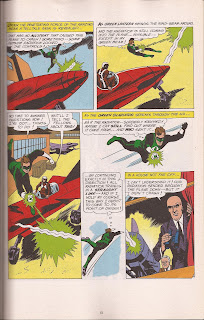 Another reason why I picked this up was I wanted to read these stories in color. I have 5 volumes of Essential Spider-Man, a volume of Essential Iron Man as well as a volume of Essential Avengers and they are in black and white. I think the DC Showcases is also in black and white. In my opinion, the best way to enjoy these classics are in color, as they were originally presented. I do understand that the color books are a bit more expensive. Showcase is usually less than Chronicles. The DC Archives are really expensive. But, if you have the extra bread to burn, I would go with color.

So far, I am enjoying my "crash course" into the history of the Green Lantern. I can see myself easily finishing the graphic novel within a weeks time and not because the book has just over 150 pages. So far, I have been sucked into these stories. I read how the Green Lantern saved a city from a missile and fought saboteurs all while trying to win the love of Carol Ferris. Already, I am wanting to read some of the classic Green Lantern/Green Arrow stories, How Jordan became Parallax and then The Spectre. I'm also hoping to see Sinestro pop up in a story.

Needless to say, I'm enjoying the Green Lantern Chronicles Volume 1. This was one of those "should I or shouldn't I" buys for me and I'm glad I picked it up. I'm looking forward to finishing this book off and move on to the next one.
Posted by Yankeejetsfan at 11:10 PM