In my last post I had mentioned I wasn't planning on attending this years New York Comic Con, but thanks to a buddy I managed to go for a couple of hours. But since I thought I wasn't going, I friend who was going asked if I wanted anything from the Con. Like a good friend, I greedily accepted his offer to bring back some swag for me.

There was a couple of things I wanted, but there was only one item I really wanted to add to my collection and thanks to my buddy, I have it. 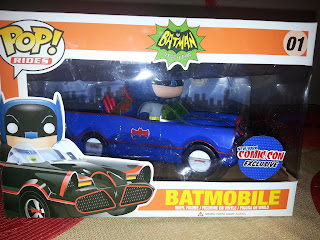 The Funko POP Vinyl 1966 Batmobile NYCC Exclusive. This Batmobile was painted to look like those vintage 1970's Japanese tin Batmobiles. I always wanted one of those, but I'm not paying upwards of $500.00 for one, so this POP is a welcome addition to my Batman/POP collection. Let's take a look at the rest of the box. 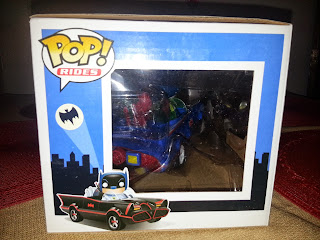 Here's one side of the box with the Bat Signal signing over Gotham City. Very 1966 series like. 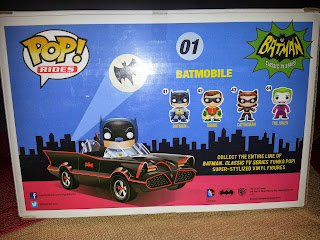 Back of the box shows the rest of the POP Vinyls in this series and yes, I do plan to pick them all up. 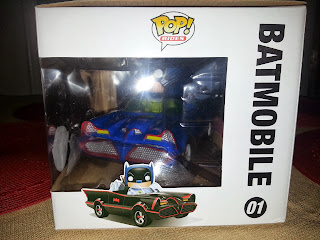 Other side of the box. 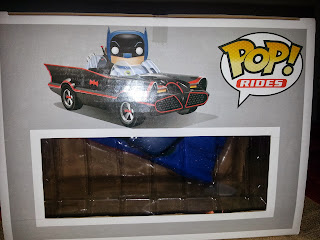 And the top of the box. Notice how Batman and the Batmobile is on every side of this box. A glory hound that Batman is, I tell ya.

Let's take Batman and the Batmobile out for closer inspection and get smelling salts for those who fainted when I said I would take the POP out of the box. 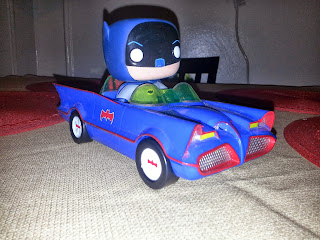 Once out of the box, I have to say this figure and the Batmobile is awesome. Yes, it's not the classic black Batmobile that we all know and love, but I love that the designers of this figure thought outside the box to create this blue Batmobile. 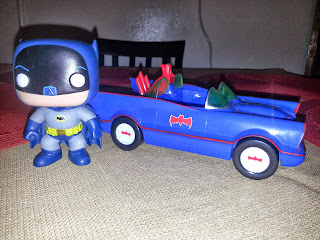 I actually did not realize that the figure came out of the Batmobile. I thought this was one piece. The fact that I get a figure and the car is a terrific bonus. 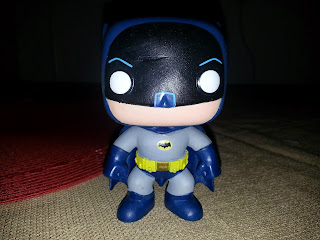 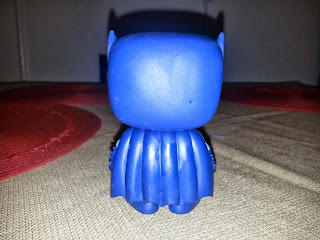 Here's the back of the figure where you can see some imperfections on the paint job. It's fine. I will be keeping this in the box anyway. 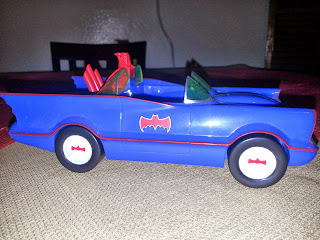 The Batmobile looks fantastic. The iconic Bat symbol is on the side of the car as well as on the wheels. The red racing stripe is still there as well. The red really pops out with the blue background.

One weird thing. When I took out the Batmobile from it's box, it was pretty dusty. I have never seen that before. 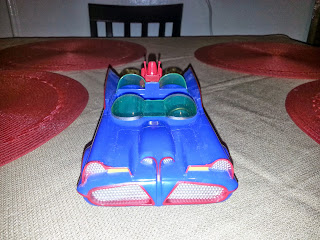 The front of the Batmobile shows off the head lights and the bubble windshields. 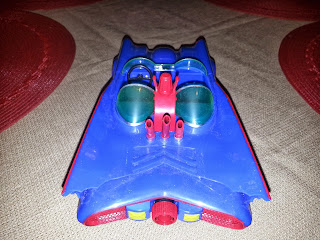 The back shows off the exhaust pipes, the flame launcher and the back lights. It's missing the parachute though. 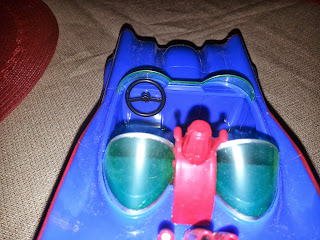 In the car, we just have the steering wheel. Makes it easier to just go I guess.

With each release, I am becoming more of a POP Vinyl fan and I absolutely love this NYCC exclusive. I will be keeping this in it's box as I will grab the regular release Batmobile POP when I see it and have that out on the shelf.

If you are planning on picking this up, I would wait a bit. I saw this on eBay and the asking price was $300.00. Give it a month or so. The prices should go down.

What I wouldn't give to have a Bat Cave playset to go along with the Batmobile. Anyone have the number to Funko's developmental department?
Posted by Yankeejetsfan at 11:47 PM