I love to meet sports stars. I love it even more if it's a free signing. Such was the case 2 years ago when former Yankees pitcher, David Cone made an appearance at a Home Depot in the South Bronx, not too far away from Yankee Stadium.

I had got there a little later than I wanted to. Of course, I over slept, so I rushed out of my apt and took the 4 train to 149th St and walked to the new Gateway Mall that just opened up right off the Major Deegan Highway. When I got there, the line was already out the door and inot the parking lot. My heart dropped and I was cursing my sleeping habbits. I still decided to get to the back of the line and try my luck anyway. Lucky for me, the line was moving, even though David hadn't arrived just yet.

Once I was in the store, I could see they had a table set up right next to the entrance, which meant the line wasnt as long as I originally thought it would be. Coney arrived not too long after and began to greet the fans and sign. As I got closer, store employees were handing out free baseballs with the Home Depot logo on the. When I got mine, I saw that the rawhide was a synthetic material and a signature would not hold up well over time. Luckly, I bought a Yankee Stadium Commeritive baseball I wanted Cone to sign for the Yankee Signed Wall I want to have for the future mancave. I glanced up and noticed I was next.

When I got to Cone, he greeted me with a smile and shook my hand. Most athletes are not the most gracious at these store events, but David was an exception. He went out of his way to make small talk with me and laughed when I told him he was the only Met I ever liked. I asked if he would sign the ball with his perfect game inscription and was more than happy to do so and asked if I wanted the free ball signed as well. Sure, why not. My cousin is a huge Yankees fan and would love the auto, so I got him to sign the ball, which I took to Seattle later that year and gave to him. David took a quick pic with me using my blackberry and I left with my new addition to the Yankees PC.

Looking at the ball on the train ride home, I was quite pleased at how it came out. Cone has a great signature and fit the inscription on the ball perfectly. My heart dropped when I looked at the picture, however. The store employee didnt use the auto focus I asked her to use and the pic came out fuzzy. The morale of the story, never let a store employee take a picture for you. 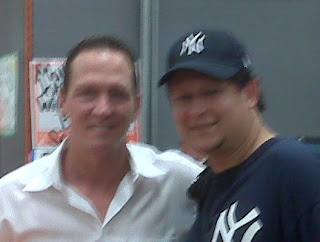 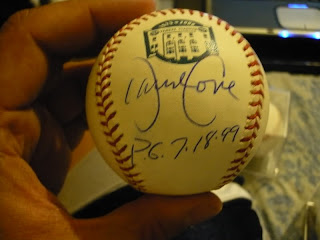 Posted by Yankeejetsfan at 9:24 AM