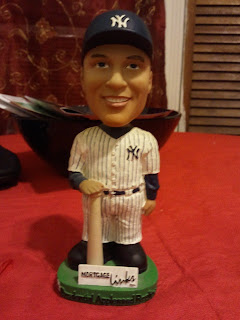 I haven't been able to add a new bobblehead to the collection for a long time. Money's been tied up in other stuff and the little I do have is usually spent on cards.
While surfing through ebay, I came across this gem. I looked at the starting bid and it was pretty low. I bid on it and won it. for the price I paid, it was a deal.
This is a 2001 Derek Jeter bobblehead given away by the Staten Island Yankees. I usually see the bobble on the bay for about 35.00 and up. I was able to get this one for under 15.00 dlvd. That's because, and I'm guessing here, it didn't have the original box or ticket stub from the game. That stuff doesn't really matter to me as I dont ever intend on selling my bobblehead collection, which now stands at 51 diffrent pieces. Plus, I really don't have the room to keep the boxes, so I toss them.
I have another on it's way. I will post a blog once it's received.
Posted by Yankeejetsfan at 12:37 PM