I recently made a few trades on Sports Card Forum for two Martin Brodeur cards to add to the growing PC. Didn't take much to add these beauties and I'm very happy to have them.
First up, is a In The Game game used Brodeur jersey card. It's my first In The Game game used card. In The Game is pretty hard to come by in the states, at least in NYC it is, so I have never busted this product. I could never understand why the cards come incased in the plastic loader. I'm gonna have to figure a way to store this in the box with the other Brodeurs. 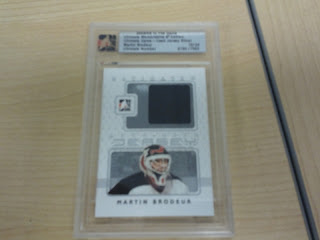 Then I was able to trade for this 2010-11 SPx Winning Combos dual game used jersey card of Brodeur and Roberto Luongo. The card is not numbered, but it's still a pretty nice card. I had originally bid on this card on ebay and lost out at the last second, so to be able to trade for it was pretty cool. 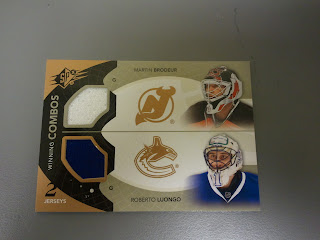 As you can tell, I finally figured out how to use the focus on my Samsung Epic, so this pic is a lot clearer than the other. I might actually go back and re-shoot the pic of the ITG jersey card.

I have more Brodeurs coming in the upcoming days. If anyone has any Brodeurs they're looking to trade, drop me an email at yankeesjetsfan@gmail.com. Thanks.

Posted by Yankeejetsfan at 12:18 PM