Some of my very favorite autographs to collect were the Upper Deck Sweet Spot Signatures. One of the very best ideas Upper Deck ever had was to take a baseball, have it signed by a ballplayer, cut out the signature and put it on a card. Very collectable and looks great displayed. Unfortunately, Upper Deck, in the end of it's run, got greedy and made Sweet Spot a high end product and cut costs on the manufacturing for the Signature cards by using a synthetic baseball which didn't hold the autographs well. As a result, you see a lot of these cards with faded signatures. Because of that, I had stopped trying to collect the Yankees in this set. But I recently got hit with the bug again and I'm trying to get as many Yankees as I can again. I am working on a Yankees only set that Upper Deck put out back in 2003, which I will show at another time. Here are the ones I currently have in my collection. 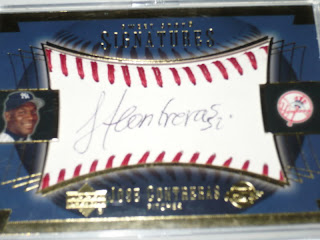 Jose Contreras. Yankees out bid the Red Sox for him, which may or may not have resulted in Theo Epstein trashing his hotel furnature in a fit of anger. Contreras never panned out for the Yankees as he was very inconsitant during his time in New York. However, his signing with the Yankees gave them a new nickname courtisy of Red Sox President, Larry Lucchino; "The Evil Empire" 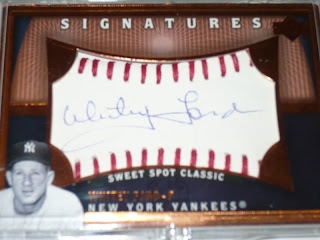 One of my favorite Sweet Spot Signature cards is this one of Yankees Hall of Famer, Whitey Ford. Played with the Yankees from 1950-1967. Won 236 games and was inducted into the Baseball Hall of Fame in 1974. Holds the Yankees all time record for wins as a Yankee. 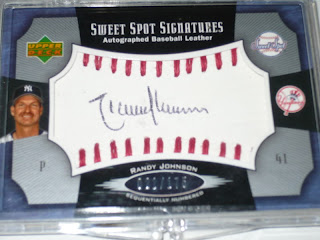 "The Big Unit" Randy Johnson didn't have many signed cards as a Yankee, but had this Sweet Spot Signature card. I bought a lot of Yankee cards and this one was in the lot. Johnson pitched 2 seasons in the Bronx, winning 17 games in both years. While not a dissipointment, he wasn't the fireballing pitcher Yankee fans expected when he came over due to his back injuries. 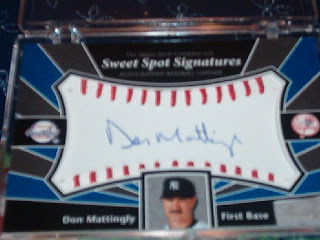 Former Yankee Captain and current Dodgers manager Don Mattingly. Donnie Baseball has a few highly sought after Sweet Spot Signatures and after Derek Jeter, is probably the most popular Yankee. His Sweet Spot Signature cards often command a good price. I was lucky to get this at a steal for my PC. I am rooting for Mattingly to do a great job in Los Angeles. 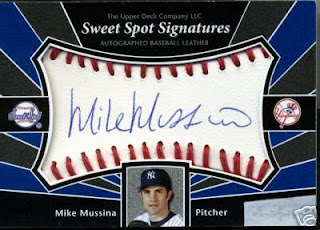 Mike Mussina. One of the best Yankee free agent signings, Mussina has one Yankee Sweet Spot Signature card that I was able to grab for under 7.00 off ebay. Moose is a borderline hall of famer and I was surprised that I was able to get this card for so low. Mussina had a terrific Yankee career, retiring at the height of his career, winning 20 games in 2008. I think if he was a Yankee his entire career, he would have broken Ford's all time Yankees wins record. 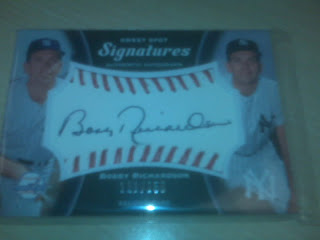 Sorry about the picture on this one. This is a Sweet Spot Signature of former Yankees second baseman, Bobby Richardson. Richardson played on those great Yankee teams of the 50's and 60's. He won 5 gold glove awards, was an 8 time all star and won 3 world championships in 1958, 1961 and 1962. Always great to get the older players into the collection. 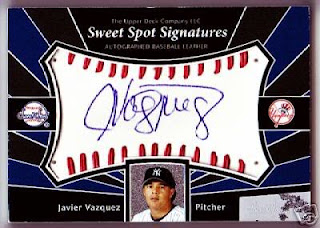 Finally, theres Javier Vasquez. This is one I have shown before. In two diffrent stints with the Yankees, Javier really didn't perform up to his capabilites. I feel he's better off in a smaller market where there isnt a lot of pressure to put up numbers. That's not a knock against Vasquez. He has shown that he can pitch and put up great numbers, just not in New York. Some people can play here, others can't.

After gazing over this collection over the weekend, I think I'm going to try and get the other Yankees that Sweet Spot made signatre cards of, if I can afford them. Then again, shopping for deals is my specialty.

Posted by Yankeejetsfan at 11:08 AM