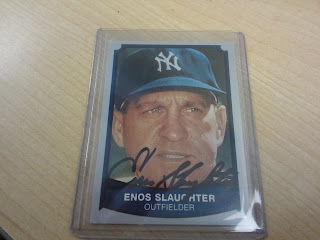 I was finally able to add this HOF'er to my Yankees autograph collection, Enos Slaughter. Slaughter played 19 years in the majors, from 1938 to 1959. Although he spent the majority of his career with the St. Louis Cardinals, he had 2 stints with the Yankees from 1954 to 1955 and from 1956-1959. He also played with the Kansas City A's and finished up with the Milwaukee Braves.
Slaughter was a 10 time All Star and won 4 World Series championships, winning 2 with the Cardinals and 2 with the Yankees. He is best known for his "Mad Dash", scoring from first on Harry Walker's single during the 1946 World Series against the Red Sox. It turned out to be the winning run of the World Series that year. For his career, he batted .300, with 2,383 hits; 169 Home Runs and 1,304 RBI's. He might have gotten to 3,000 hits had he not missed 3 years due to his military obligations during World War II. His number 9 has been retired by the St. Louis Cardinals and he was inducted into the Baseball Hall of Fame in 1985 via the Veteran's Committee.
I checked this auto against other Slaughter autographs I seen on ebay, including some cuts and it looks like the real mccoy. I got this for under 5.00 dlvd. Very pleased to be able to cross off another Yankee off the autograph list.
Posted by Yankeejetsfan at 2:37 PM