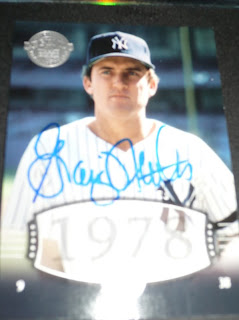 I was able to get Graig Nettles to sign this card at a Long Island card show at Hofstra University a few years back. I was very excited to meet Nettles because, growing up, he was my favorite Yankee. Unfortunately, he was the prime example of how disapointing it can be to meet your idols.
Graig Nettles was traded to the Yankees from the Cleveland Indians before the 1973 season. He was a main clog in those 1970 Yankee teams, appearing in the World Series 3 times and winning 2. He was considered one of the best defensive third baseman at that time. He also set an American League record for career home runs by a third baseman. His best season was in 1977 when he had 37 home runs, 107 RBI's, won the Gold Glove and won the World Series. He was traded to San Diego and appeared in one more World Series in 1984, losing to the Detriot Tigers. He retired in 1988 as a member of the Montreal Expos.
As a kid, his diving stops on ground balls thrilled me. Whenever I played baseball, I would always man third, my number was 9 and I would dive for ground balls, even if they were routine grounders. I remember being so upset when he was traded and rooted for San Diego in the World Series. I always wanted to meet him and when I found out he was appearing on Long Island, I jumped at the chance. My girl friend at the time lived in Brooklyn, so driving from her apt to Hofstra was not a problem.
I remember waiting on line, being real nervous too. I finally got to the front of the line and handed him my card. I told him how big a fan I was and how much he meant to my childhood. He looked at me and said, "Great, kid." and looked back down at the card. Signed it and passed it back to me and I was hurried away by the attendent sitting next to him.
Great, kid? That was all he could say to me? What a rip! I was so upset by it. My girl friend tried to cheer me up, but it was no use. I got the brush off from my favorite childhood ball player. Not even my favorite cheeseburger could cheer me up. Since then, I have soured on Nettles. I have met him twice after at diffrent functions and he was always the same crabby guy each time. Kinda stinks when you expect a person to be one way and you get something totally diffrent. I never heard any horror stories regarding Nettles, so it was a huge surprise to me. I had met a lot of players before him and they were all nice to me, so having your first bad experiance at a signing and getting it from your childhood idol really sucked.
Needless to say, I won't be going out of my way for Nettles anymore.
Posted by Yankeejetsfan at 11:51 AM