Now, I probably should have used a John Romita Spidey or a Todd McFarlane Spider-Man picture considering the 2 trade paperbacks I bought feature their work, but damn, I love Steve Ditko's Spider-Man so much that I had to use a pic of it for today's blog.

I had decided to concentrate on buying more trade paperbacks and graphic novels than picking up single issues. My reasoning for that was for because my comics always seem to get harmed in some way. You can imagine my anger when I discovered a leak in my apt during a recent rain storm and that leak spilled rain water all over my comic collection. Luckily, my Spider-Man and what few Batman books I had were away from the leak but the damage had been done. Now, whatever titles I read are usually in trade form. Going to the comic book marketplace, I wanted to keep an eye out for any trades that caught my attention. I found these two books and took them home with me. 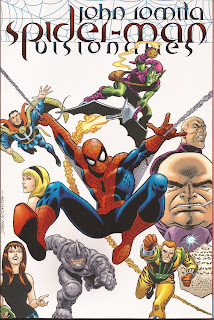 I did say I loved Steve Ditko's Spider-Man. I have to tip my cap off to the man who co-created Spidey and drew him for 38 issues of Amazing Spider-Man and one issue of Amazing Fantasy, but to me, the greatest artist to ever work on the Amazing Spider-Man is John Romita. Romita drew so many great Spider-Man stories and some of them are in this book: John Romita Spider-Man Visionaries. Romita drew my very favorite Spider-Man story. The 2 part story, titles 'How Green Was My Goblin" and "Spidey Saves The Day!" has the Green Goblin finding out Spider-Man's true identity as well as revealing himself to be Norman Osborne. The Goblin's origin is also revealed and there is an epic battle at the end of the story. Another great Spider-Man story, "Spider-Man, No More", which would be part of the basis of Spider-Man 2 as well as others stories are included in this trade. As soon as I saw it and flipped through it, I knew it would be mine. the 4.00 price tag helped. 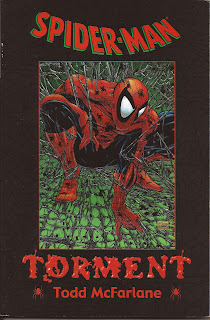 I also picked up one of the great stories in the Spider-Man mythos. Torment was written and drawn by Todd McFarlane in 1990 to kick off the new Spider-Man title. It's the story of Spider-Man hunting the Lizard as the Lizard has gone off on a killing spree. The first issue alone would sell 2.5 million copies, solidifying McFarlane's popularity. It's a story, surprisingly, I never had a chance to read in it's entirety. Now I will be able to. Then, I can sleep peacefully at night without muttering "Torment, Torment". Another four bucks bought back my soul.

I cannot wait to be able to open up these books and lose myself in the world of Spider-Man. I look forward to seeing Spider-Man battle the likes of The Green Goblin, Kingpin and The Rhino. Then, I can go into the sewers and watch Spidey battle the Lizard in one of the great Spider-Man stories of the 90's. For the next few months, I will be overloaded on Spidey stories. I can't think of a better way to spend my quiet evenings.
Posted by Yankeejetsfan at 10:36 PM