Even The 1966 Batman Can Go Digital 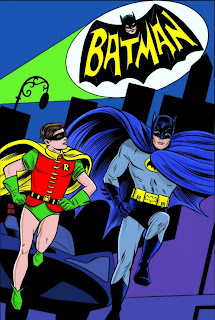 Yesterday, DC Entertainment (I would rather call them DC Comics) released their Digital-First Batman '66 #1. This new digital comic format incorporates DC2, which is DC's newest platform to enjoy digital comics. It allows you to read the book as the action "happens". In other words, when you read digital comics before, it was usually a panel by panel read. With DC2, the panel is interactive. With a swipe of your finger, dialogue appears and the actions moves along. It's not animated, it just enhances the reading experience. 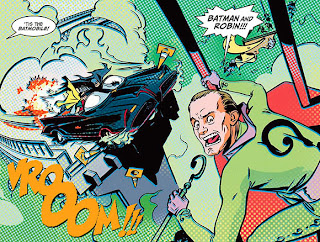 When I heard this was going to be released digitally, then in regular comic book format, I decided I would be picking this up digitally. I am picking up less and less comic books these days and instead focusing on graphic novels and digital comics so this release was right up my alley. I have to say, I really enjoyed it. The story and dialogue made it seem like I was actually watching an episode of the show. Plus, the issues are in parts, like the T.V. series was.  The artwork was fantastic. The artist, Johnathan Case, captured the essence of the show in his art and did a great job on the likenesses of the actors as well. The DC2 format was smooth and made the digital comic reading pretty enjoyable and I cannot wait to read other titles using this format.

I do think you would get a lot more out of the experience if you read it on a tablet rather than a phone. I read this on my Note 2 and I had some trouble making out the dialogue balloons at times. But to be honest, it wasn't enough of a problem to make me not want to order the next issue of Batman '66 or any other title that incorporates DC2 in the future. It just makes me want to either fix the screen on my Kindle Fire (don't ask) or buy the Google Nexus 7. 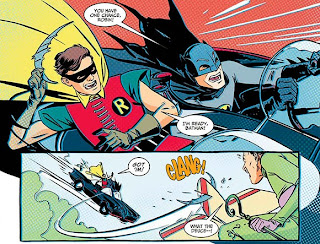 I know a lot of fans are pretty old school when it comes to comic books. I get it and in a way, I'm right there with you. I would rather pick up a comic book in my hands and flip the pages. But room is an issue for me as well as trying to keep them in good condition. Just the other day, there was a leak in my apartment and most of my comic books got caught in the leak, ruining most of them. I had to throw them out. With digital, I don't have to worry about condition or storage of the books. I can pick up the issues on the DC, Marvel, Comixology, Kindle or Nook apps and enjoy the titles wherever I go. Caution, you can only get the DC2 format through the DC Comics app.

If you haven't read a digital comic and are a fan of the Batman T.V. series or tried the digital comic and wasn't a fan, I strongly suggest you give Batman '66 a shot. I downloaded my copy for only 99 cents, so it's not a huge hit to the wallet. I will definitely be picking up future issues of this book. It just goes to show you that you can make a classic modern and make it very cool while keeping it's essence intact.
Posted by Yankeejetsfan at 6:08 PM