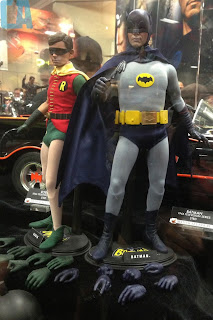 By now, I am sure you guys have heard the news and even seen pictures. Hot Toys unveiled their 1966 Batman and Robin figures and from all the pictures I have seen they look awesome. It looks like Hot Toys have the likenesses of Adam West and Burt Ward as close to perfection as anyone can.

The figures look like will come with multiple hands and bat-a-rangs. Not sure if they will be coming with anything else. I would have liked to have seen Batman come with a shield and Robin with maybe a bat communicator. But from what I see, everything else about these figures are awesome.

Now, the price tag hasn't been announced yet, but I'm sure they will be anywhere from $249.99 to $299.99. That will put me out of the running on owning these figures. As I have said in the past, I just can't justify paying that much for an action figure. I already have the NECA '66 Batman as well as the '89 Batman on pre-order and I think they look great from the pictures I have seen. They did push back the dates a month back, but I'm OK with that.

As much as I think these Hot Toys are super sweet, I won't be owning them unless they come down in price or I can get a good deal for them elsewhere. A few years back, Mattel put out a Christopher Reeves Superman figure that looks really good. I'm hoping they will do the same with an Adam West Batman. That figure wasn't too expensive and I would definitely pick up one.

Let the spending begin!
Posted by Yankeejetsfan at 6:28 PM