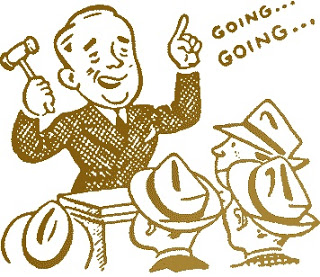 It's auction time for us members of the League Of Extra Ordinary Bloggers. A time where we wish each other good luck in adding new and glorious pieces to our collections and then figure out a way to blindside each other for the same piece. It's a war and we have our war paint and fatigues on as we zero in on the pieces we wish to add to our collections and make sure we don't give up our first born to get that piece. This is eBay on steroids and I'm about to drop a few elbows to get what I want. O.K, maybe it isn't that vicious, but you get the idea.

Hake's Americana and Collectibles is holding another one of their fantastic auctions and is sponsoring this week's topic. Here is the link to Auction #209 in case you would like to drool all over your keyboard like I have so many times:

Now, I have never participated in a Hake's auction. A lot of the stuff they have up for bid is a bit out of my price range, but I do love to browse through their inventory and just play make believe in my mind and pretend I was Ted DiBiase and make a mental note of what I would buy if I was loaded. Unfortunately, once Mr. Rogers enters the dream, I pretty much end it 'cause that's just plain creepy.

For this week's topic, we are to go on an imaginary shopping spree at Hake's current auction and list what we would buy if we had the funds. I decided to pick pieces for collections I collect or picked pieces to start a collection I have always wanted. In some cases, they were pieces I had or come across as a kid or pieces that I have always longed to own. What did I pick? Well, you my dear reader are pretty nosy, but I will show you anyway.

Let's start with 2 pieces I would love to own for my Batman collection: 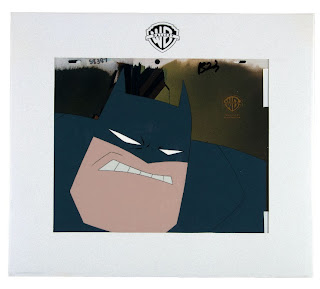 This is an animated cell from one of my favorite episodes of Batman: The Animated Series. Entitled "Legends Of The Dark Knight", the episode follows 3 kids as they envision what The Batman is really like. One kid imagines the Caped Crusader as something right out of a Dick Sprang drawn comic book with a heroic voice and all. Another visualizes Batman to be like Frank Miller's Dark Knight Returns, complete with mud fight with the Mutant Leader. I loved how the episode showed what Batman has looked like over the years and to add this piece to my Batman collection would be fantastic.

The Mego-head that I am would never be able to pass up the chance to be able to bid on and possibly own a boxed Batman Mego. The graphics on the box just pop out at you and the figure is mint and complete inside. This would be a great addition to the Batman shelf right next to the loose, not so mint Batman I do own. 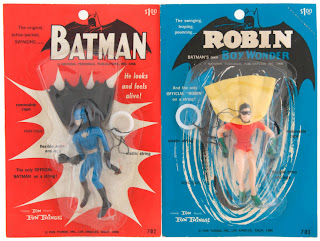 I have never seen these before. Batman and Robin Jigglers from Fun Things. They're rubber figures with removable capes that you can hang on door knobs or other spots around the house. I'll just keep them carded and on my shelf, thank you. These pre-dated the Ben Cooper jigglers by about 7 years. 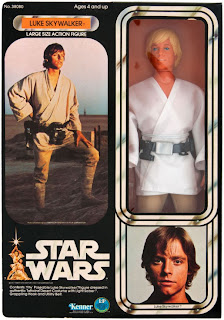 I didn't find much to add to my Luke Skywalker collection, but I did see this bad boy. As a kid, I had this and loved it. I would have lightsaber battles with the Darth Vader figure I owned, had him hang from his grappling hook or just sit on my desk looking cool as he was when he blew up the Death Star...ok, maybe he wasn't Han Solo cool, but he did shot at Stormtroopers, got into a cantina fight and blew up a couple of Tie Fighters. Makes him cool in my book.

For my Beatles Collection, I found this gem: 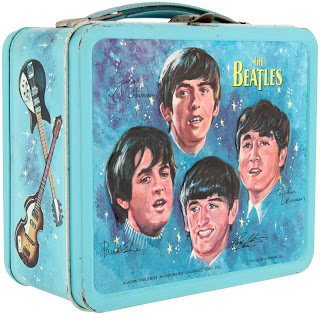 My vintage Beatles memorabilia is pretty limited and to be able to add this awesome lunchbox to my collection would instantly make it the crown jewel of my Beatles collection. This is a pretty expensive piece to own and right now its at a reasonable bid, although I don't expect it to be for much longer.

It even comes with the thermos. I want to say the picture has them in 1965. I think they wore suits similar to this at the famous Shea Stadium show on August 15th, 1965.

The last item I would bid on is a lot of DC Comics Hallmark statues, a couple of which would fit nicely in my Batman and budding Superman collection: 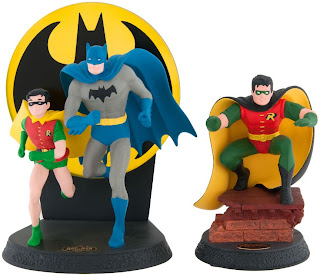 I simply love that statue of Batman and Robin running with the Batsignal displayed behind them. I have always wanted to add that statue to my collection, but either it's too pricey or I'm outbid on one. The Robin beside it is also a nice piece. 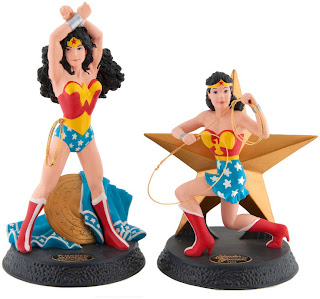 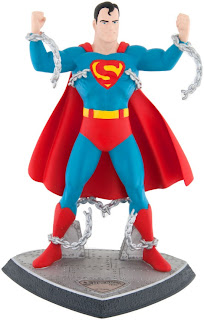 I love this Superman statue which has him in that iconic pose from Superman issue #11 from 1941. A must have. 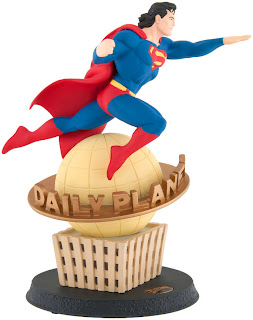 A very cool piece of Superman flying over the Daily Planet which would be a nice addition to the Superman Shelf. Plus, he is sporting a sweet mullet.

Speaking of Superman, I found a really cool piece for the Superman collection: 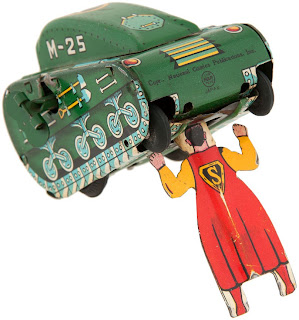 This tin piece was a toy that you would wind up and Superman would lift it up from the bottom and flip the tank over, then start over again. 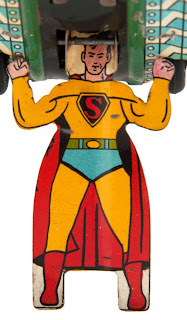 I never got why Superman is wearing a yellow suit rather than the iconic blue uniform. I know I have seen an earlier version of him in the blue suit. Still, a vintage piece like this one would be a head turner in any Superman collection.

I would like to thank Hake's for allowing us use of the pictures from the auction. I have seen a ton of other pieces that I would love to have from Monkees to Green Hornet to even goodies for my baseball collection. I could go on and on and show off all the stuff I would love to own, but we all don't have hours to read the ramblings of a poor geek.

Since you're still up, check out what my fellow League Members would bid on:

Tell them The Sexy Geek sent you. I'm sure they won't know what the hell you are talking about.
Posted by Yankeejetsfan at 12:06 AM