I could watch this GIF for hours.

As you can probably tell by the GIF above, this is yet another Batman post. I'm also guess you also probably realized the addition has something to do with the 1966 Batman show. Well, you would be partly right on that one.

Back in 1966, due to the success of the T.V series, companies were releasing anything and everything with Batman's likeness on it. From lunchboxes to loafs of bread. From super duper large plastic Batman cowls to rings. Trading cards, ice cream, comics (Natch), orange and fruit punch drinks, toys of varying types. Anything and everything had Batman's likeness on it, which us collectors pay top dollar for these days on eBay and through various auctions. Thankfully, I didn't have to pay top dollar for this newest addition to the Batman wing of the House Of Swag. 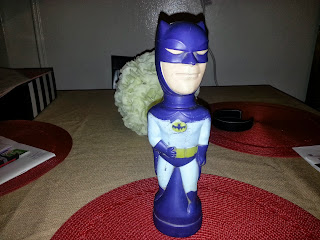 That's right kiddies. Mikey's scored himself a 1966 Batman Soakie bottle. This is an item I had been wanting for quite sometime and I finally scored a pretty decent bottle, condition-wise for a fraction of what I have seen these go for previously.

Soakie bubble bath bottles have been around sing the 1950's, but their heyday was in the 1960's when they had licences to characters like Batman, Superman, The Beatles, Bugs Bunny, Disney, Universal Monsters among others. The bottle was shaped like the character and the head screwed off allowing you to pour the bubble bath. This was the work of a genius as the kid got a new toy, but parents got the kids to take their baths without any hassles from them. It was a win win situation. These bottles can now bring in some decent coin. 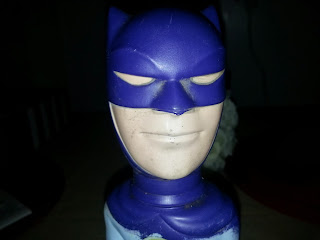 Thankfully, the one I purchased was in pretty decent condition. This bottle can probably use a warm cloth as there seems to be some dust on his face. 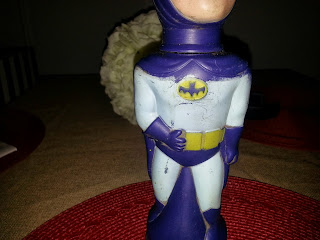 This the where the bottle has some problems. There is paint loss right under the cape and a bit as well as on his lower abdomen and leg. But the emblem is in perfect condition. Go figure. 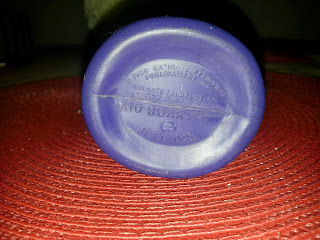 If I knew nothing of this bottle, I could tell it was from 1966 as it says so right on the bottom. 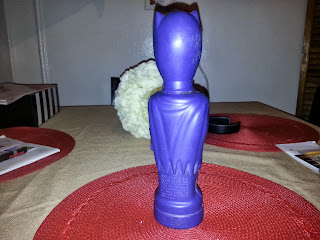 The back of the head has some scratches, but that's about it. No paint loss on the back, which is terrific.

For a figure that is nearly 50 years old, I am very happy with the condition of this bottle, He is going to look great with the other vintage Batman merchandise I have been able to pick up this year. I can't wait until I am able to display everything.

There are still some stuff on my Batman want list, but it's great I was able to get this crossed of said want list and who knows? Maybe I can add another item before the year is out. But even if I don't I think I did pretty good this year.

For those who aren't familiar with Soakies, here is a vintage commercial selling them to the unsuspecting masses.


I love these vintage commercials.
Posted by Yankeejetsfan at 10:58 PM