Today was the monthly toy show in greater Wayne, NJ. I was going to hunt down some goodies to add to the ole' House Of Swag and I was really looking forward to it. My buddy, George had the idea to go and we agreed to meet really early Sunday morning and head over to shift through bins filled with toys, tables displayed with gems and shelves showing off...well, you get the idea here.

Now, I usually don't discuss the journey to said event in my blogs, but because of the title of this entry, I feel compelled to explain myself.

George and I met up at the appointed time at the appointed place and hit the road. After a stop at the bank and gas station, we found ourselves in New Jersey pretty quickly, thanks to my buddy's GPS with the voice of Mr. T guiding us along with a well placed insult here and there. I got comfortable and figured we would be at the toy show in no time at all.

The Mikey Curse. I'm back, jerky!

Ah yes, my nemesis was back with a vengeance. The curse that loves to throw curveballs at me when I think I have it easy and it was Clayton Kershaw today.

When we hit New Jersey, the sky's literately opened up and down came the torrential downpours. The rain was God awful. at one point, we couldn't see the road ahead of us and had to really slow down. At one point, the rain got so bad that we got off the Garden State Parkway and drove through Paramus looking for a spot to hang out and wait out the rain.

Of course, Paramus's businesses are closed on Sunday's, so as the curse laughed it's ass off, we carried on until the rain finally let up and we were back on the road. We made our destination, no worse for the wear, but already on edge thanks to the impromptu tsunami we drove through. But once we got in, game faces were on. We were shopping and if I can survive that rain, then I could survive the dude wearing the stained Dr. Who t-shirt, blocking the aisle, preventing me from passing. 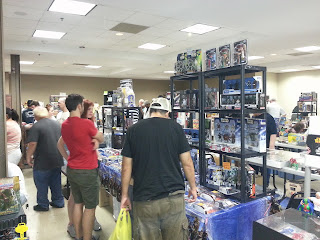 The toy show had a little bit of everything. Vintage, contemporary, Star Wars, Super Heroes, TV Show Toys, Sci-Fi, DVD's, banks,comic books, and then some. The show was held in one decent sized room and had a pretty good turn out. People were there just buying up a storm and I wanted to get in on the action. As with every show, there was bargains to be had and there was dealers who was overpricing their wares. One table was selling an Avengers Hulk figure for $50.00, which is laughable. 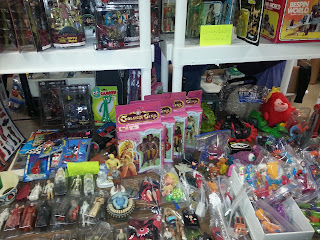 Some real nice stuff on this table. As far as I know, that can of soda was not for sale. 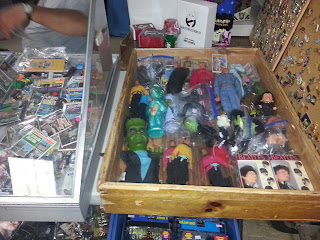 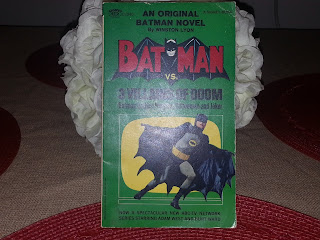 My first pick up of the day. I went in to the show with a game plan of Batman, Spider-Man, any affordable Beatles and if I could find it, that LJN Roddy Piper figure. As soon as I walked in, George spotted a table selling vintage paperbacks and found this one for me. I have been wanting this 1966 paperback novelization of the TV series for a while and $5.00 later, I finally had one. 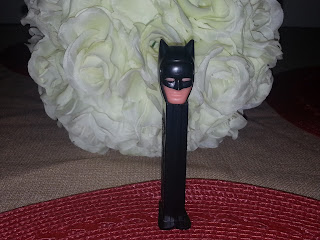 Another table had a box of 1.00 items and after looking through the box, I came away with this late 80's, early 90's Batman Pez dispenser. 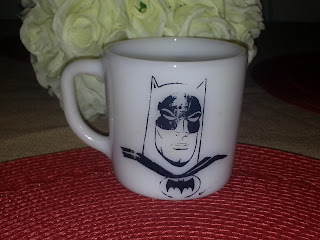 Another vintage Batman item I have been wanting for a while. I know the lithography on this cup could have been better, but since it's 47 years old I could live with it. Plus, at $ 5.00, I could sleep better at night. Of course, after walking a little further, I saw the same cup, in pristine condition. I heard the Mikey curse laugh at me again and call me a moron.

At one table, I bought a few items. 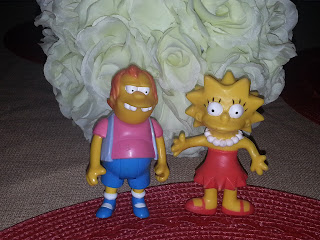 I can never pass up anything Simpsons and at $1.00 a piece, they were coming home with me.

If I could say I have buyers remorse over anything I picked up today, it was over this vintage Batman item. 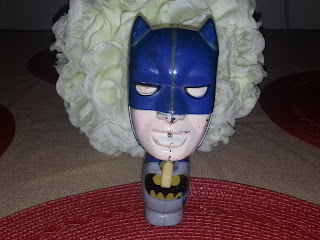 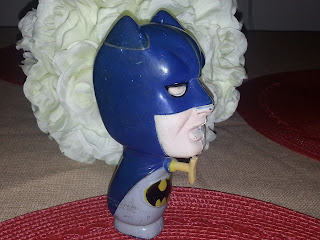 Not exactly in the very best condition. Again, it was a Bat-item I wanted for a while, so I pulled the trigger on it, figuring I could clean it up a bit when I got home. What I failed to realize until I got back in the car was there was a small, broken off piece behind the right ear. The curse strikes again. 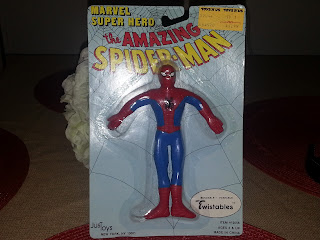 I also got this neat mint carded Spider-Man bendie figure from the same dealer. Probably, along with the Batman paperback, one of my favorite pick ups of the day. I had paired this with the vintage Batman squirt gun and got a great deal for both which made me agree before I even throughly looked at the squirt gun. Oh well, I can display it in a way that no one will ever know until I can get an upgrade. Shhhhhhhhhh.

The day didn't end there. After getting lost in North Jersey trying to get back (The Curse representing!) and making it back to Westchester, we made Toys R Us the final stop of our day and I was able to pick up these goodies. 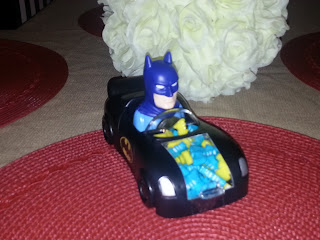 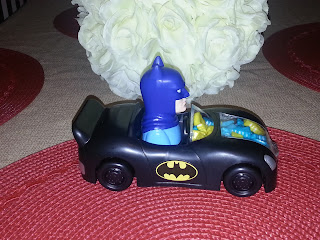 If there are three things I love in this world, it's Batman, the Batmobile and candy. This little guy has all three so I happily bought it. I will be eating the candy as I do not want any unwelcome bugs in the House Of Swag. 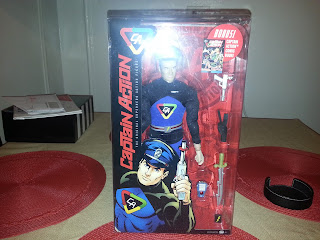 My final purchase was this Captain Action base figure. You long time readers might remember I bought the Spider-Man costume and accessories last year and had needed a Capt. Action figure to display it. The figure had been $39.99 for the longest time. So when I saw it today at $16.00, I grabbed it and I can throw on the Spidey outfit and display it once I have my shelving up.

I gotta tell you guys, it's been a while since I had a toy haul like the one I had today and it was sweet. The next few months will be a bit tough to have another haul with birthdays, weddings, holidays and a trip out to California upcoming. But if I can add a piece here and there, then I should be content until I can go off on another crazed toy hauling kind of day.

Curse be dammed!
Posted by Yankeejetsfan at 10:58 PM