Brian over at Cool And Collected posted this assignment for us Leaguers: Post pictures of blue in your collection.

So, what I'm going to do is post a blog of my 5 favorite blue batman items in my collection, not in any order. Some of the pictures will not be the best as they were taken with my other camera. I need to retake those, but for now, I will post them I wish I could post 1 picture of the whole lot, but at least I'll get some miles out of this blog :P 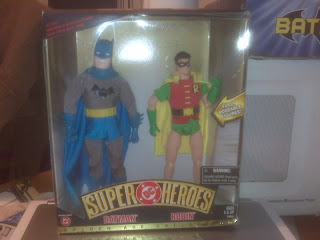 Here is one of those pictures. But this is a figure (or set as Robin is included) that I just love. I have been reading Batman comics for as long as I can remember and some of my favorite stories are from the 1940's and 50's. This set of figures captures that era to a t right down to Batman smiling. I have had this set since it was released, but I never took the figures out of the box, which I will do once the shelves are built. I cannot wait to display these figures. It's just that smile on Batman seems out of place since today's Batman rarely smiles. Either this Batman loved his work since he was grinning or he was even more twisted and demented than we realize. 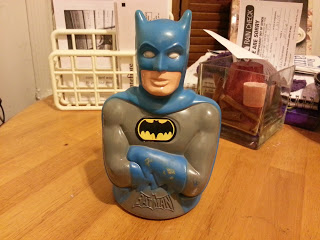 Here is a vintage Mego item that I picked up earlier in the year. It was something I really wanted going back to my younger years when my mom and I would go to Alexander's on Fordham Rd in the Bronx and would eventually hit the toy section where I would turn on the Mikey charm and try to convince her to reach for her wallet and get me this bank. Well, much like later in life, the Mikey charm didn't work and I had to wait until I was an adult to be able to add this to my collection. 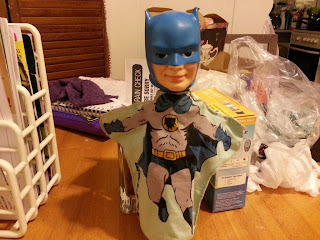 Ignore the bags I have in the background and concentrate on the gem that is front and center. This little piece of awesomeness was the very first item from the 1966 Batman craze era I picked up. I truly believe that this is a piece that every Batman collector needs to have in their collection. I was trying to be able to win one of eBay or buy one at a convention forever, but never was able to get one at the price I wanted. Finally, I was able to pull the trigger on one that was affordable and in terrific condition too. 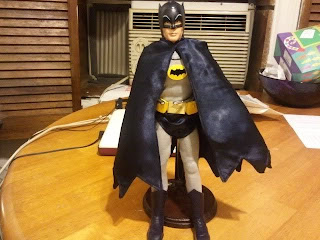 With all the 1966 Batman stuff that's coming out, I still hold this custom near and dear to me. I was able to purchase this from a collector whom I met on 66batman.com and I'm so glad I did. The likeness to Adam West's Batman is fantastic. The costume and accessories are done very well. I will still look to get the Hot Toys Batman, but even if I do I will have this figure displayed right next to it. 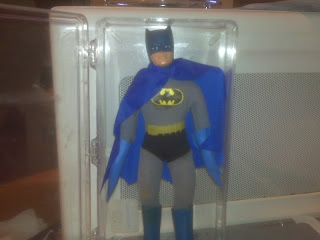 Here's the figure that started it all for me. The love of Batman and the passion for collecting this character that I fell in love with back in the early 70's as either a 4 or 5 year old. I'm actually guessing it could have been even earlier, but I didn't own a tier 1 figure. It was a tier two, with the plastic wrists. Either way, this figure has been in my collection for close to 40 years. Only the cape and gloves are repos, bought from that famed Mego reproducer, Dr. Mego. I bought these at the old Big Apple Convention from him and had a nice conversation about Mego figures with him. I would like to replace the Batsuit because of a stain it has because he was eating a chili dog and it fell on him. I don't because I would like to keep the original sticker for as long as I can. Other than the stain, the figure has held up pretty good, I'd say.

My favorite Batman has always been with him wearing the blue and grey. It's the Batman I grew up with on the Super Friends, The All New Adventures of Batman And Robin and from the Neil Adams drawn comic books. I love the blue and grey suit. That's not to say that it's the only suit I like because I do like the black and grey suit also. It's just when I see the blue, it brings me back to when I was a kid and the only things that mattered to me were food, the Yankees, Spider-Man and Batman. Come to think of it, that's still all that matters. Not much has changed there.

Ok, that's not all that matters to me, but Batman is as big a part of my life today as a 42 year old as he was when I was 5 years old, running around the playground with a blue towel wrapped around my neck (I did that again the other day, scarring many a child for life). Black or Blue outfits, The Batman will always be in my life and my infatuation with the Caped Crusader will never die.

You have to check out these fellow League Members and see what makes their collections blue: