I just felt the 25 year old Sexy Geek cringe. Back then, I was all about the conventions. I wouldn't have stepped foot into a flea market. I was convinced then that all you would find was other people's garbage, nothing worth buying. As you can see, I was not too bright back then.

That all changed when I attended my first flea market with my buddy, George. We hit a flea market up in Poughkepise, NY and that opened my eyes to just how awesome a flea market was. All the Star Wars, Super Hero, Sports stuff and comic books that could be had, for a better price than you would get at a convention too. I don't remember what I picked up that day, if anything, but from then on I was sold on flea markets.

Now, this week's topic for us extraordinary bloggers is what is our favorite pick ups from either a flea market or garage sale. To be honest, I have never been to a garage/yard sale. I would love to go to one one day, but let's just talk my favorite flea market finds.

It narrow it to just one would be pretty hard. I have yet to find that "Wow" factor (Storage Wars representing!) at a flea market. But I do have a couple of pieces that I really do like: 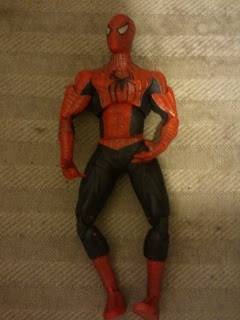 I used to have the 12 inch Spider-Man figure from the first movie. I had it displayed at my desk at work, proudly I might add (damn sales people and their funny looks). Then one day, a co-worker bought his kid to work and the kid fell in love with the Spidey and wanted to play with it. When it was time for him to go home, he looked so sad in returning the Spider-Man that I let him keep it, which I got a bunch of stunned looks from my co-workers as they all knew how much I loved that figure. As much as my Spider-Man fan boy was screaming Nooooooo, I can't say no to a child or see a child leave sad. It was worth it when, on Monday, his dad told me the kid slept with the Spidey.

Flash forward a few years later, I come across this ultra articulated, 12 inch figure at a flea market in Wayne, NJ. My eyes zeroed right in on it as soon as I passed the table. After picking it up and inspecting it, I knew I had to have it. $5.00 later, I found a worthy replacement for my long gone Spidey. 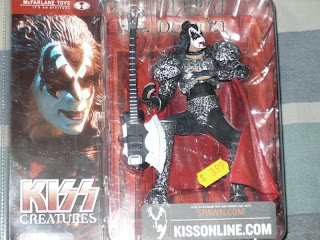 I like KISS. I used be huge into the band, but their latest album, putting Tommy Thayer into Ace's makeup along with Gene and Paul throwing KISS's name on everything (an arena football team? Really? Really?) has me soured on the band. I really don't go out of my way for their stuff anymore. I did manage to find this Gene figure from McFarlane's Creatures Of The Night line at a flea market in Brooklyn and snagged it for less than the sticker price. I really was hoping to find the Eric Carr figure, but no dice. I may put this up for trade one day as I really want the Alive set more.

Well, that's really about it. I haven't really been toy shopping at flea markets for long. But now that I know how cool they can be, I am always on the look out for them. When I go, I usually find something to take home with me. Who knows, I may actually find that "Wow" factor one day. But for now, the thrill of the chase continues for me.

Check out what these other League members found on their haunts: